Critical Design emerged from a dissatisfaction with design used in an instrumental way, which reinforces, rather than questions, the status quo. In response to this dissatisfaction, designers have independently created conceptual, at times provocative proposals outside of the commercial context. These projects aim to make the public engage with subject areas addressed by designers, as a mediating device between theory and applied practice. It aims to prompt a process of reflection which highlights the complexity of the underlying issues.

In his book ‘Critical Design in Context’ 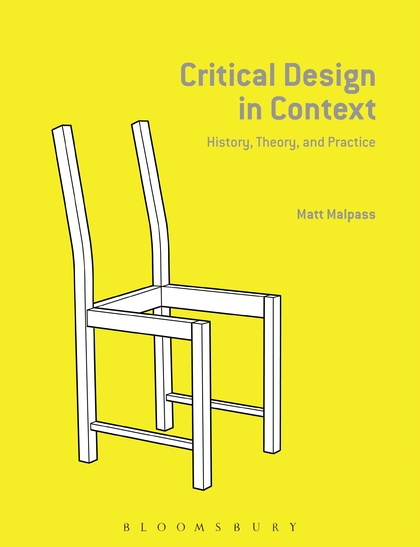 , Matt Malpass describes critical designers as facilitators for large groups of people and communicators of ideas, rather than producers of objects. The approach is likened to a ‘research method’ which functions as social commentary and asks more questions than it seeks to answer: it is problem-finding, not problem-solving. As 1960s and 1970s Italian anti-design can be seen as an early form of critical design, it moved towards more participation and direct political action, while contemporary critical design is more rooted in theory. It is mainly being practiced in academic contexts.

With its often satirical approach and ambiguous products, as well as its positioning of design as research practice, it appears to address only other designers, instead of society at large. Another criticism addressed at critical design is an over-focus on problems without providing a way out, ‘designing at’ people rather than ‘for’ or ‘with’ them, from an authoritative standpoint. ‘Undesigners’, a more radical category of critical designers, question the reliance on design to respond to the failures of design as well as the assumption that designed objects can form political publics. They experiment with forms of ‘returning’ to pre-designed states and undoing internalised ideas of ‘good design’ while debating the necessity of design itself. Nonetheless, as Malpass argues, the practice can only further develop if it remains open to criticism itself. (See also: → Speculative Design, Dunne & Raby)